If you are not familiar with spock it is testing framework for Groovy and Java. It’s been stable for quite some time and I highly recommend you to check it out if you are annoyed by Junit and Java’s style of writing tests.

The standard way of testing Java application is to use Junit and some mocking framework (Mockito,EasyMock, PowerMock etc.).

Java combined with those frameworks makes it rather hard to write and read tests in medium and large sizes projects:

If tests are hard to write we usually think of them as something painful and start to neglect them. Avoiding or delaying writing tests leads to the situation where application cannot be trusted anymore. We then become afraid of making any changes because other part of the app might break in some bizarre way.

It shouldn’t be this way. Test should be easy and fun to write. After all they are like a cherry on top, proving that the features are implemented correctly.

In my opinion the most important responsibility of the test is to be as most readable as possible. Business changes to the project are introduced all the time. If we change something in the application we have to change test too (unless you’re applying open-closed principle, which I’ve never heard of anyone successfully adapting :D). If tests are hard to read there is a big problem.

On the other hand - these are just my opinion, who am I to judge? Do you feel similar about this topic or is it just me? If you disagree, or have some objections leave a comment!

Spock is both testing and mocking framework. What’s more it extends Junit runner so it can be runned by the tools you used for your tests before.

The best thing about Spock is that it’s basically a DSL (domain specifing language) for writing tests. It’s based on Groovy and is designed particularly testing. It introduces some syntax features just for that purpose. You may therefore expect some neat stuff in it (which is indeed correct).

Groovy is kinda like a scripting version of Java - simple, less verbose but retains all the power of JVM.

This cheatsheet contains the most useful spock features regarding testing Java applications. Most of this is copy-paste from official spock documentation. I compiled it while I was learning the framework to have all information in one place. I figure out since it’s already compiled why not share it on a blog too. 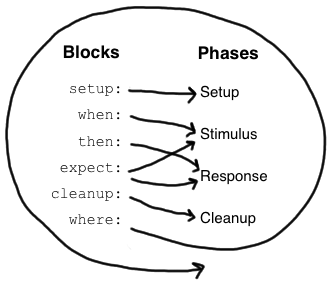 Input data can also be seperated with expected parameters using ||:

A method annotated with @Unroll will have its rows from data table reported independently:

We have to figure out which row failed manually

Right side must be Collection, String or Iterable.

Stubs do not have cardinality (matches invokation anyTimes)

Whenever the subscriber receives a message, make it respond with ‘ok’